Historically, four sea turtle species were found in the Cayman Islands: green (Chelonia mydas), loggerhead (Caretta caretta), hawksbill (Eretmochelys imbricata) and leatherback (Dermochelys coriacea) turtles. Green turtle nesting populations are believed to have been the largest in the Atlantic (numbering in the many millions), and the other species were also abundant. After discovery, commercial harvesting by visiting ships led to a massive reduction and by the mid-1900s our sea turtle populations were thought to be extinct.

Since 1998, the DoE has been conducting a systematic survey of the beaches of the Cayman Islands to identify signs of turtle nesting. The first years of monitoring showed that leatherback nesting was indeed locally extinct, and likely lost to us forever, but extremely small numbers of green, loggerhead, and hawksbill turtles persisted. Since that time, hawksbill nesting has continued to hover at the edge of extinction but loggerhead and particularly green turtle populations have begun to show signs of recovery – increasing from less than 50 nests in the early years of monitoring to more than 600 nests in 2017. However, this represents the number of nests for all species and all islands combined, and each turtle lays multiple nests per season. Therefore the number of individual female turtles in the population is still extremely small, and each one is important to the population’s possible continued recovery.

Poaching of endangered nesting female turtles represents a critical threat to the population, and due to artificial lighting in nesting habitat it is uncertain how many baby turtles survive. For more information on threats to baby turtles and what can be done to protect them, please see our Turtle Friendly Lighting page.

May to November is turtle nesting season, when sea turtle emerge from the sea at night, lay their eggs in the sand, and return to the water. Here’s how to identify adult turtles and their tracks (click for a larger version):

If you find a turtle track, nest, or baby turtles, or see anyone disturbing a turtle, please contact the Department of Environment (DoE). 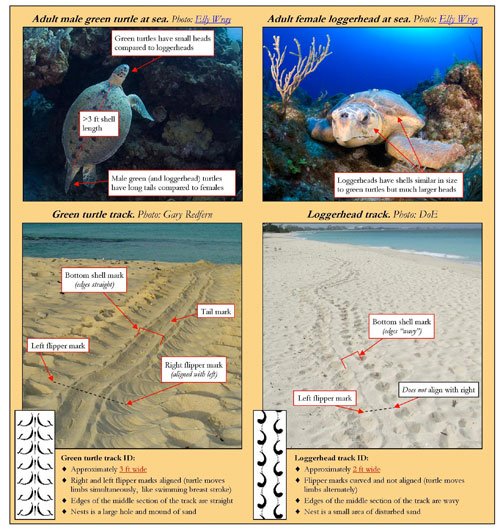