29 August – Residents who are currently keeping Cayman parrots as pets will be given six months, from 1 September 2019 to 29 February 2020, to register those birds with the Department of Environment (DoE).

After February 2020, any unregistered Cayman parrots that are still being kept as pets may be seized by DoE conservation officers, and the bird’s owners can be fined for possessing or keeping them illegally. 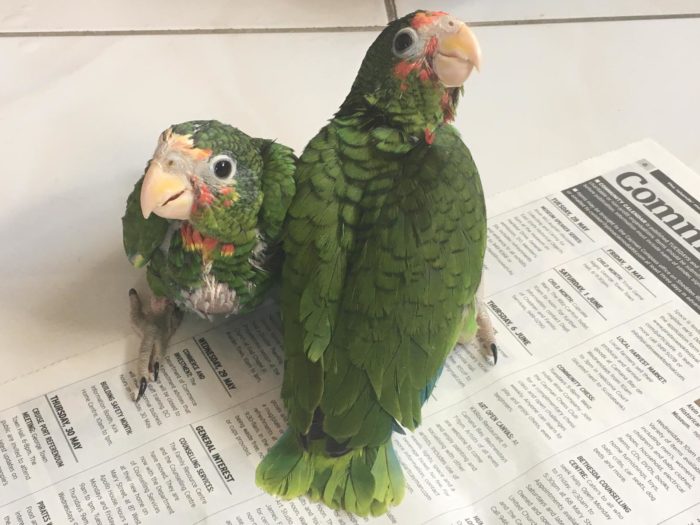 “We’re trying to correct a problem with illegal parrot ownership that has been allowed to persist for going on 20 years,” said DoE Terrestrial Resources Unit manager Fred Burton. “These Cayman parrots are a protected species under the National Conservation Law, as they were under the Animals Law, and really shouldn’t be kept as house pets. However, we know hundreds of people do keep them and, if they are being responsible, we want to give them a chance to continue to keep their birds.”

During the parrot amnesty period, residents may contact the DoE at 949-8469 or via email at DoE@gov.ky and a DoE team will attend their location to register the parrot. The registration process involves assigning each pet parrot an identification number imprinted on a small band around the parrot’s leg and implanting an identification chip, called a PIT tag, similar to the ID tags used to register other pets such as dogs and cats. DoE officers will provide a health check, as well as advice during the visit on how best to care for Cayman parrots. This service is free of charge.

Officially registered Cayman parrots may still be kept as pets. However, after February 2020, no more parrots will be registered and anyone keeping an unregistered parrot will be doing so illegally.

The amnesty process is one that has been implemented by several Caribbean islands and is necessary to reduce or eliminate the illegal trade and poaching of wild Cayman parrots, which puts the wild parrot population at greater risk each year.

“When the restrictions on keeping these birds are enforced, it will hopefully reduce or stop the poaching of wild Cayman parrots,” DoE Research Officer Jane Haakonsson said. “The local parrot population on both Grand Cayman and Cayman Brac remains critically low in the wake of Hurricanes Ivan in 2004 and Paloma in 2008. The parrots’ ability to recover from those storms and human induced threats is also compromised through ongoing habitat loss.”

“The Cayman parrot is our national bird and an important part of our natural history. We must continue to take steps to ensure the protection of our parrots, so that they can flourish in our islands now, and into the future,” said Minister of Environment, the Hon. Dwayne Seymour. “I urge everyone who owns a Cayman parrot to contact DoE during the amnesty period in order to register their pet parrot.”