27 May – This year marks the 10th anniversary of a fruitful partnership between the Department of Environment (DoE) and Marine Conservation International (MCI) aimed at gathering information on and protecting sharks in Cayman waters.

The partnership led to the creation of the Shark Conservation Cayman programme (initially called Cayman Islands Large Marine Predator Programme), which helped push for the complete protection of elasmobranchs, such as sharks and rays, under the Cayman Islands National Conservation Law (NCL). The protections took effect in April 2015 making it illegal to fish for sharks and stingrays in Cayman waters.

Although the NCL protections are relatively recent, thus making it difficult to gauge their overall impact, the shark conservation partnership has documented some encouraging data for these apex marine predators.

“Our data suggest the overall abundance of sharks in Cayman Islands’ waters is currently higher than in most of the Caribbean,” said MCI Co-Director, Mauvis Gore, a professor at Heriot-Watt University in Edinburgh. “However, the numbers are not quite as high as in a few places – such as Bahamas and Belize – where sharks have been protected for longer periods.” 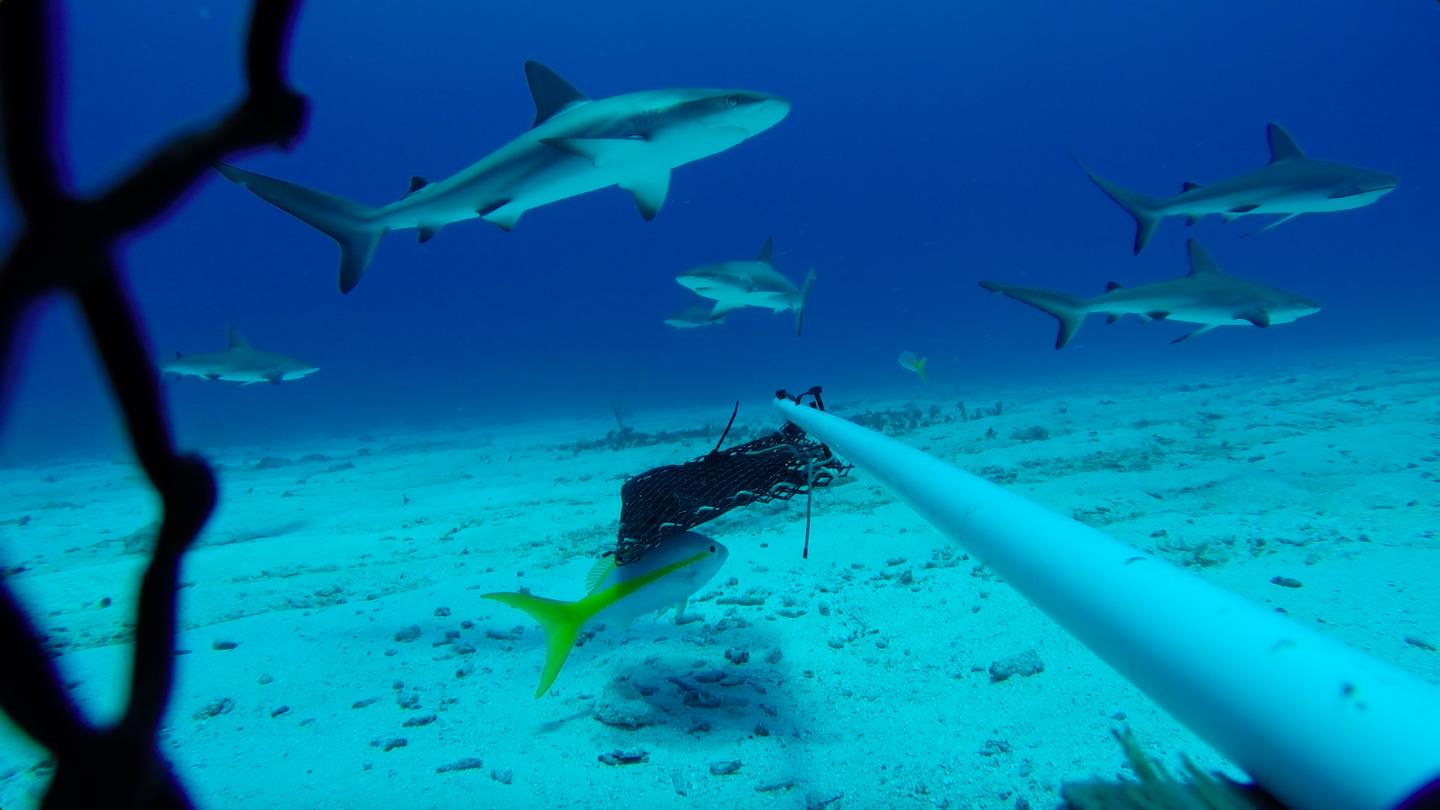 (Six Caribbean reef sharks are shown here in one frame taken from a DoE/MCI survey in Little Cayman during 2017.)

Large-bodied sharks, such as reef sharks, nurse sharks, hammerheads and tiger sharks – all of which are found in Cayman’s coastal waters – have significant value, according to Prof. Gore. The non-consumptive tourism value of local shark species estimated by the project was between US$46 million and US$63 million. Scientists also theorise that sharks, as top marine predators, can help protect coral reefs via a “cascade” effect within the food chain.

“Simply put, sharks will eat a certain number of mid-level predators that feed on smaller, herbivorous reef fish. This, in turn, regulates the number of fish that eat algae from reef areas, keeping them clear for coral growth,” said DoE-MCI Shark Project Officer Johanna Kohler. “We believe there is a correlation between a healthy shark population and healthier coral reefs.

“Sharks do not ‘steal’ marine stocks from local fishers,” Ms. Kohler said. “Rather, we’ve observed they tend to bolster the numbers and health of reef fish by protecting them from mid-level predators and also by weeding out some less successful specimens, keeping the weaker ones from reproducing.” 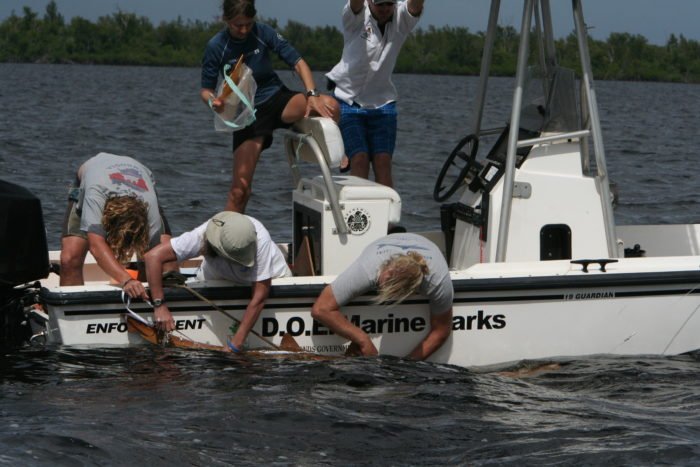 (In this photo from 2010, DoE research officers Janice Blumenthal and James Gibb look on as members of the Marine Conservation International/DoE team, including Professor Mauvis Gore (centre), place an acoustic tag on a shark.)

Ms. Kohler, a PhD student from Germany, has partnered with DoE and MCI scientists for the last three years in Cayman, performing the biannual shark surveys using Baited Remote Underwater Video cameras, a non-invasive technology that allows scientists to record the sharks in their natural environment without the animals having to interact with humans. Shark Conservation Cayman has also placed tracking devices on more than 50 local sharks over the past 10 years, allowing scientists to track their movements via acoustic monitoring.

The tracking data available tends to show that many Caribbean shark species have a range of more than 10 kilometres. “This suggests that, to be provided with adequate protection, shark species require marine protected areas on the scale of Cayman’s recent marine parks enhancement to be put in place throughout the Caribbean,” Prof. Gore said.

To form Shark Conservation Cayman, the DoE combines its marine and staff resources in conjunction with MCI’s scientific expertise and the participation of graduate-level students, such as Ms. Kohler, to do more than either organisation would achieve on its own.

“When we started the shark project 10 years ago, the DoE identified this area as one where we needed to improve our scientific data collection and research,” DoE Director Gina Ebanks-Petrie said. “Now, thanks to this partnership, we have much better information available to help protect these ecologically and economically important predators.

“To some extent, the attitude in Cayman toward sharks has changed over the past decade. Shark Conservation Cayman has spent a lot of time in local classrooms and talking to local fishermen about these crucial marine species,” Ms. Ebanks-Petrie said. “Ten years ago, the prevalent view of sharks was ‘if you see one, kill it.’ I believe that people today have a better understanding of why sharks are important to us.”

In addition to DoE and MCI staff time and resources, Shark Conservation Cayman has been the recipient of three Darwin Initiative grants from the U.K. Department for Environment, Food and Rural Affairs (Defra). It has also received generous donations from local brewery Caybrew via its aptly named ‘White Tip’ brand, a brand which supports shark conservation developed collaboratively with DoE and MCI. In addition, other sponsors include the Save our Seas Foundation, Fosters Food Fair, the Southern Cross Resort and Ocean Frontiers.

“We’d like to thank all our partners in this effort and hope to receive their continued support over the next ten years,” Professor Gore said.

“There is still so much we don’t know for certain about sharks in our waters,” said Ms. Ebanks-Petrie. “We believe more time and diligent study on this project will provide more valuable insights.”

Minister for Environment, the Hon. Dwayne Seymour, is pleased with the ongoing project: “I would like to take this opportunity to express my appreciation for the sustained efforts of the DoE team and their affiliates, for the protection of this important species.”

If you want to learn more about DoE/MCI shark conservation research please see following link to the DoE website: https://doe.ky/wp-content/uploads/2017/10/Ormond-et-al-2017-Protecting-Cayman-Island-Sharks-GCFI-69-7.pdf.