31 October – The Cayman Islands’ open season for conch and whelk begins Friday, 1 November.  The season will run through 30 April and allows the taking of conch and whelk from coastal waters within legal limits.

The legal daily limit for possessing conch during the open season is five per person or 10 per boat each day, whichever is less. Only queen conch (Strombus gigas, Lobatus gigas) may be taken and no one may take – or permit another person to take, purchase, receive, offer for sale or possess – more than five conchs from Cayman waters. 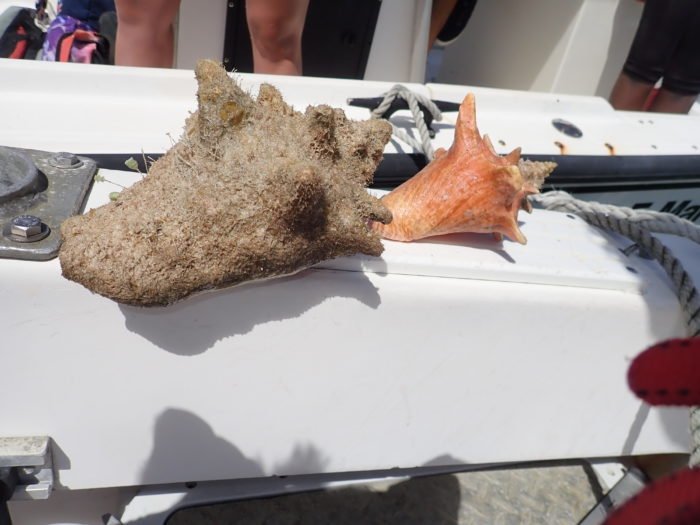 (The conch on the left is an adult conch, the one on the right is a juvenile. DoE would prefer that residents not take the smaller-sized juvenile conch, allowing them to grow to maturity and reproduce. Photo: DoE)

Members of the public are also reminded that Cayman’s annual lobster season does not open until 1 December. Individuals may come across lobsters while conching or whelking when it is still closed season for lobsters. Anyone caught possessing locally-caught lobster out of season will also be arrested and prosecuted.

Minister for Environment, the Hon. Dwayne Seymour, stated “We encourage the public to be careful, pay attention to safety, and to respect the catch limits and the rules for our marine protected areas this season.”

If anyone sees, or becomes aware of, suspected poaching activity, or suspects someone is purchasing more than the legal daily limits of locally caught conch or whelks, they are asked to call 911. They may also contact DoE enforcement officers directly on Grand Cayman (916-4271), on Cayman Brac (call 911) or on Little Cayman (925-0185).