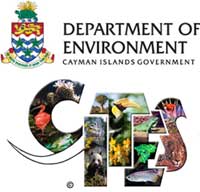 CITES stands for the Convention on International Trade in Endangered Species of Wild Fauna and Flora. CITES regulates the international trade in endangered species, toward reducing the impact of commercial activities on threatened species of flora and fauna.

Local species under threat from international trade include conch, coral, marine turtles, parrots, iguanas and orchids. CITES restrictions also apply to products derived or manufactured from listed species. Recognizing the seriousness of this threat, the Cayman Islands became party to CITES in 1978, only five years after it was first agreed. Unfortunately, worldwide many species remain at risk from over-harvesting to supply international demand.

CITES does not prohibit trade in all listed species / products – some may still be bought and sold. In these cases, CITES documentation must be prepared, to accompany the products before they can be taken out of / brought into the Cayman Islands. Black and pink coral ornaments and jewelry fall into this category. CITES Permits may be obtained in advance if people are considering purchasing black coral as a souvenir.

It is illegal to take coral from Cayman waters. For this reason, no local coral is used in the jewelry business and the Cayman Islands Government does not allow the export of any raw coral from the Cayman Islands. Anyone caught taking specimens out of the Cayman Islands, either by local or overseas Customs, without the proper permits, faces confiscation of the products, fines or imprisonment.

Conch shells, a popular tourist souvenir, are taken from Cayman waters as a by-product of local fishing for their meat. Because acquisition of the shell is incidental to this activity, and because there are currently laws in place to limit the amount of conch fished in Cayman waters, the export of a small number of shells (no more than three) by individuals as souvenirs does not require a CITES export permit. This is in line with the international policy formulated by the Parties to the Convention and the governing CITES Secretariat in Geneva.

Marine turtles are endangered throughout the world so commercial trade in all turtle products is prohibited under CITES. This prohibition also applies to products derived from the captive turtles at the Cayman Islands Turtle Centre until the Centre can become a CITES Registered Captive-breeding facility.

Export of other native species, including parrots, iguanas and orchids is also prohibited. Due in part to their rarity, plants and animals such as these are often sought out by unscrupulous collectors, making CITES restrictions an important component of the international conservation of these species.

Questions regarding souvenirs, particularly ones made from plant or animal products, and the permitting requirements for these, should be addressed to the Department of Environment. In most cases where a CITES permit is required, the issuing of permits will normally take about two weeks.