7 January – At certain times, coastal areas around the world will report much higher than normal tidal surges known as perigean spring tides or ‘King Tides’, caused by  several factors including the proximity and alignment of the sun and moon to the Earth. 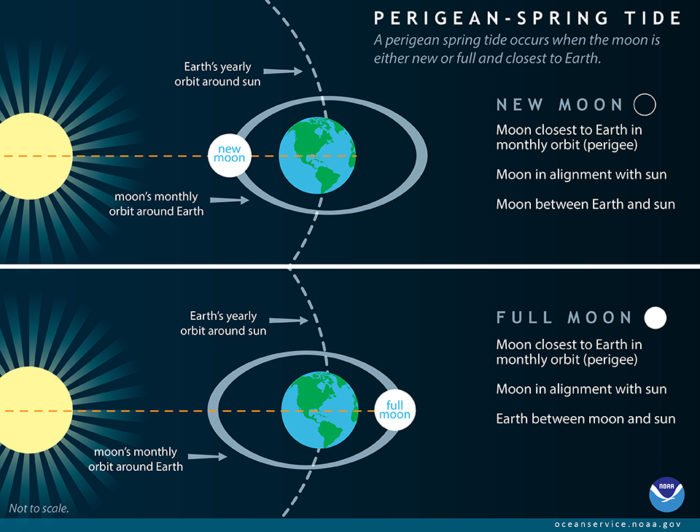 (Graphic courtesy of the US National Ocean Service)

In 2020, King Tides are expected to occur in Cayman during mid-January and again in early to mid-February coinciding with the full moons for those months. Scientists at the National Oceanic and Atmospheric Administration (NOAA) are able to predict these ‘King Tides’ each year and they are not normally considered cause for alarm. However, given our low-lying topography and rising sea levels associated with global climate change, the Department of Environment (DoE) is keen to begin to better understand potential impacts resulting from these events. Depending on the location of the sun and moon relative to the Earth at the time, tides may rise just a few inches to a couple of feet above normal.

Residents in all three Cayman Islands may notice higher tides during January and February of this year and, if they do, the DoE is asking them to document those occurrences by taking photographs and sending the pictures to the DoE.

“In recent years we are aware of increasing instances of seawater from King Tides washing into some low-lying local streets or groundwater backing up in storm drains,” said Wendy Williams, manager of DoE’s environmental management unit. “Unfortunately, we don’t currently have any annual, reliable observations of these occurrences. DoE staff members will document the high tide incidents they are aware of, but more eyes watching are always helpful.”

“Having better annual records of these high tide events can help us to understand what a future sea level rise might look like, and thus aid in making preparations for such an event,” said Minister of Environment, the Hon. Dwayne Seymour. “I would encourage Cayman residents to participate and help us to document these events so we can learn from them.”

Anyone with photos and information of King Tide events may send that information to our email address, DoE@gov.ky or call us to report it at 949-8469.