The Cayman Islands Department of Environment (DoE) is urging Cayman Brac and Little Cayman residents to act fast to help head off a Green Iguana (Iguana iguana) influx on the Sister Islands before it becomes too big a problem.

“As it stands now, the Green Iguana invasion is in its infancy in Cayman Brac and Little Cayman,” said DoE Terrestrial Resources Unit Manager Fred Burton. “However, we can easily imagine a scenario where the tremendous scale of the Green Iguanas’ overcrowding seen on Grand Cayman could be duplicated in the Sister Islands.”

It is not feasible to plan for a mass cull on the Sister Islands, similar to what is taking place on Grand Cayman, simply because there are not enough greens in Cayman Brac and Little Cayman to warrant such an effort, Mr. Burton said.

However, teams of trained volunteers, known as “Team Go Green” in Cayman Brac and “Green Iguana B’Gonna” on Little Cayman have been at work reporting Green Iguanas, and in some cases culling them, seeking to prevent them from out-competing local Rock Iguanas (Cyclura nubila caymanensis) for habitat and food. The DoE reported in September 2016 that Green Iguanas were actually interbreeding with Rock Iguanas on Little Cayman, an occurrence that scientists had previously thought impossible. 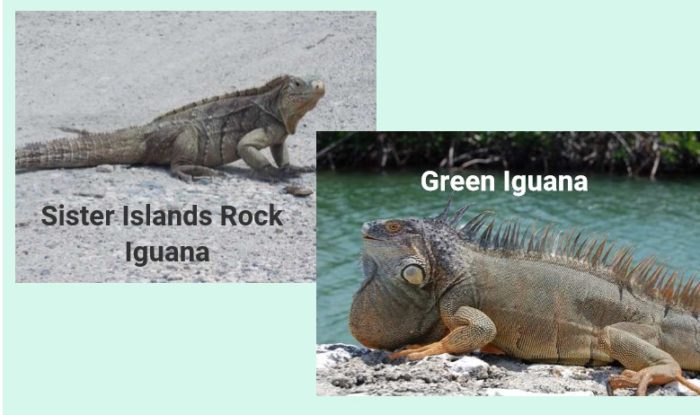 The DoE has periodically dispatched its own iguana cull teams to the Sister Islands over the past two years, but Terrestrial Resources Unit Research Officer Sophie O’Hehir emphasises that local resident participation will be needed to stem the Green Iguana invasion.

“It is not necessary for all Sister Islands residents to catch and cull a Green Iguana when they see one, but everyone can learn the differences between Rock Iguanas and Green Iguanas and pick up a phone to report a sighting,” Ms. O’Hehir said. “It is important to report sightings quickly. Reports more than 30 minutes after a sighting are usually too late to enable volunteers to catch the Green Iguana.”

To assist with these reports, the DoE has set up two phone lines to report Green Iguana sightings. The Cayman Brac Wildlife Hotline is 917-7744. The Iguana Hotline – Little Cayman is 925-7625. Callers are asked to provide as much detail on the iguana location as possible so that cullers can be dispatched swiftly and efficiently.

“Cayman Brac and Little Cayman residents should take the threat of a Green Iguana invasion seriously and not simply ignore what has occurred on Grand Cayman, thinking it can’t happen in the Sister Islands,” said Environment Minister, the Honourable Dwayne Seymour. “I urge Sister Islands residents to call these hotline numbers to report invasive Green Iguanas as soon as they see them. I’d also like to take this opportunity to thank the many volunteers already responding to these reports on their own time, unpaid. They perform an invaluable service to their community.”