The circumstances involved in the demise of the four marine predators vary in each case. In one incident from late February on Grand Cayman, a small silky shark became entangled in an abandoned fishing net. Another unidentified shark in Cayman Brac was found on 15 March having been cut by a sharp instrument. Two sharks were found dead in Cayman Brac waters in April – both were lemon sharks. One suffered severe head trauma while another apparently died after being fished from the water and then kicked back into it from the dock.

Two nurse sharks were injured on Grand Cayman during the same period; one was trapped in a fish pot and the other suffered a cut to its side. A blacktip shark that the DoE was tracking in Little Cayman using an acoustic monitor was also injured and its fate remains uncertain at present. 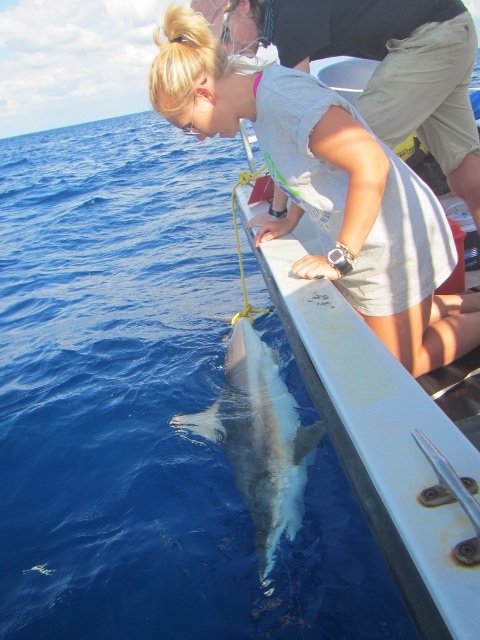 (DoE Shark Project Officer Johanna Kohler tags a blacktip shark in Little Cayman during May 2016. This shark is one of those injured in recent months. (Photo: Tim Austin)

“That blacktip shark was the first shark I tagged when I got to Cayman,” said Shark Research Officer Johanna Kohler. “Shark Conservation Cayman began tracking this shark three years ago and we’ve followed its movements since. We are working hard to better understand our local shark population and to conserve them, so it is frustrating to see these crucially important predators being killed for sport or out of spite.”

Elasmobranchs, the fish subclass that includes sharks, stingrays and skates, are protected at all times in the Cayman Islands. Fishing for sharks, selling their fins or meat, or deliberately harming a shark is punishable under the National Conservation Law by a substantial fine and forfeiture of the vessel and equipment used in the offence.

“Healthy sharks in a marine ecosystem are a positive sign of healthy coral reefs and robust fish populations,” said DoE Manager John Bothwell. “In recent years, we’ve noted more sharks in the waters around Cayman. That is leading to more interactions with fishermen and an increased number of accidental catch incidents that occur when a shark is attracted by a another struggling fish caught on a line.”

The DoE urges people who fish to release accidentally caught sharks by removing the hook or cutting the line. Sharks do not diminish fish populations nor compete with fishermen, but keep fish populations in balance by feeding on weaker, less successful marine specimens and thereby removing them from the breeding stock.

“There must always be a balance struck between the needs of fishers today and the need to conserve marine life for future generations,” said DoE Director Gina Ebanks-Petrie. “But there’s no reason for people to abuse and torture sharks or any other animals that play a crucial role in keeping our underwater ecosystem vibrant and healthy.”