8 January – A new study from researchers at the Scripps Institution of Oceanography at the University of California San Diego has documented a successful recovery effort among Nassau Grouper populations in the Cayman Islands thanks to an approach involving government agencies, academic researchers and nonprofit organizations.

The study, published January 6, 2020 in Proceedings of the National Academy of Sciences, used a two-pronged approach including tagging and video census data for monitoring and counting Nassau Grouper populations in an effort to more accurately estimate annual numbers of fish in the population and thus provide insight into the effects of ongoing conservation efforts. While many governments have enacted regional or seasonal fishing closures in an attempt to allow recovery of overfished stocks of aggregating reef fishes, this is one of the first studies to provide evidence that these measures can be successful. 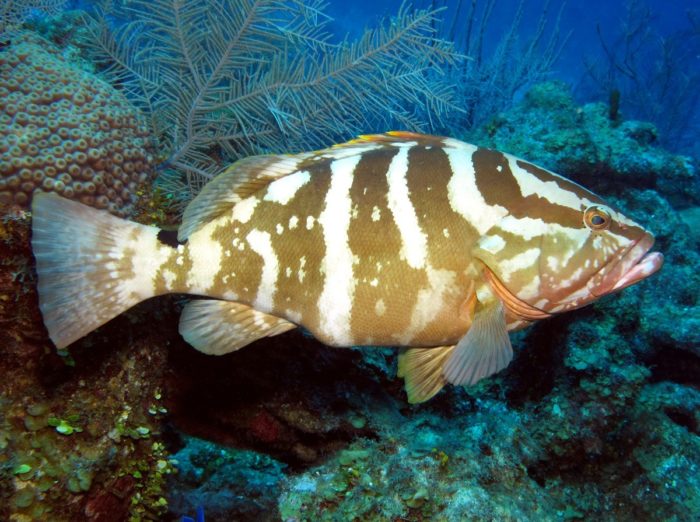 “Normally, Nassau Grouper are relatively solitary, and tend to be hard to catch,” said Lynn Waterhouse, a former PhD student in the Semmens Lab at Scripps Oceanography and research biologist at the John G. Shedd Aquarium in Chicago. “But at spawning, they come together en masse to form annual spawning aggregations, where historically tens of thousands of fish come together to reproduce, so they’re very easy for fishermen to catch.”

Due to overfishing during spawning, the species has suffered region-wide stock collapse. By the 1980s large aggregations had all but disappeared from the Caribbean region. Of the remaining aggregations, few contained more than 1,000 individuals and the species is currently listed as critically endangered by the International Union for Conservation of Nature.

In 2001, an aggregation of around 7,000 Nassau Grouper was discovered near Little Cayman, the smallest of the three islands located south of Cuba in the Caribbean Sea. In 2003, the subsequent rapid overfishing of the aggregation drove the Cayman Islands Government to enact aggressive management policies by banning fishing at aggregation sites during the spawning season. Through the Grouper Moon Project, the Cayman Islands Department of Environment (CI-DOE) partnered with a citizen conservation group called Reef Environmental Education Foundation (REEF) and scientists from Scripps Oceanography and Oregon State University to develop a monitoring strategy for the remaining Cayman Island aggregations.

“We developed a unique approach for monitoring these populations over the course of nearly two decades,” said senior author Brice Semmens, an associate professor and ecologist at Scripps Oceanography. “This included a combination of using mark and recapture tagging techniques to track the proportion of tagged fish and video transects to count fish across the aggregation.”

The researchers faced a number of obstacles, including funding challenges and particularly difficult monitoring conditions – the Nassau Grouper has the unfortunate habit of aggregating at inconvenient and often dangerous locations along the reef shelf edge, making it difficult for divers to easily observe and tag the aggregation. But with the support of the CI-DOE, the team has been able to maintain their monitoring efforts for over 15 years.

Importantly, the researchers did not just track the number of fish in the aggregation – they worked together with the CI-DOE and local communities to share results and discuss next steps. After reviewing the data being collected by the Grouper Moon Project, in 2016 the government initiated an even more progressive fishing policy, banning all fishing of Nassau Grouper during the winter spawning season along with limits on the number and size of fish that can be kept.

As a result, the team was astonished at how quickly the Nassau Grouper population recovered – over the last 10 years the aggregation on Little Cayman had nearly tripled in size, going from around 1,200 fish in 2009 to over 7,000 in 2018. This growth was due, at least in part, to a rapid increase in the addition of new, younger fish to the aggregation.

“This really demonstrates the power of this collaborative approach to conservation,” said co-author Christy Pattengill-Semmens, REEF’s director of science. “We were able to monitor the population and provide information to support management as the data came in, allowing the Cayman government to respond rapidly with policy changes.

“These efforts have been successful because of the strength of the partnerships among the government, academic research groups, and nonprofits,” she added. “CI-DOE also has a long history of working with fishing communities in the islands.”

The team also emphasized that these results show that patience is key.

“Due to the way these fish breed and the timing and location of spawning events, it can take several generations before the right ocean conditions ultimately facilitate young grouper joining an aggregation,” said Pattengill-Semmens. “This means that communities and governments may need to implement protection strategies over the course of years or even decades to meet their management targets.”

“This is an ideal approach for conservation,” said Semmens. “Just doing the science isn’t enough. You need to partner with groups and governments capable of turning science into conservation decisions that support the local community.”