The DoE Reef Team specifically focuses on safeguarding the coral reefs, sea grasses and mangroves in the Cayman Islands. There are many long-term projects that the team coordinates on an annual basis, including assessing changes to benthic habitat, fish assemblages, lionfish populations and coral bleaching events. The Reef Team is also responsible for assessing the impact of boat-related incidents to essential habitats, such as groundings and anchor damage. 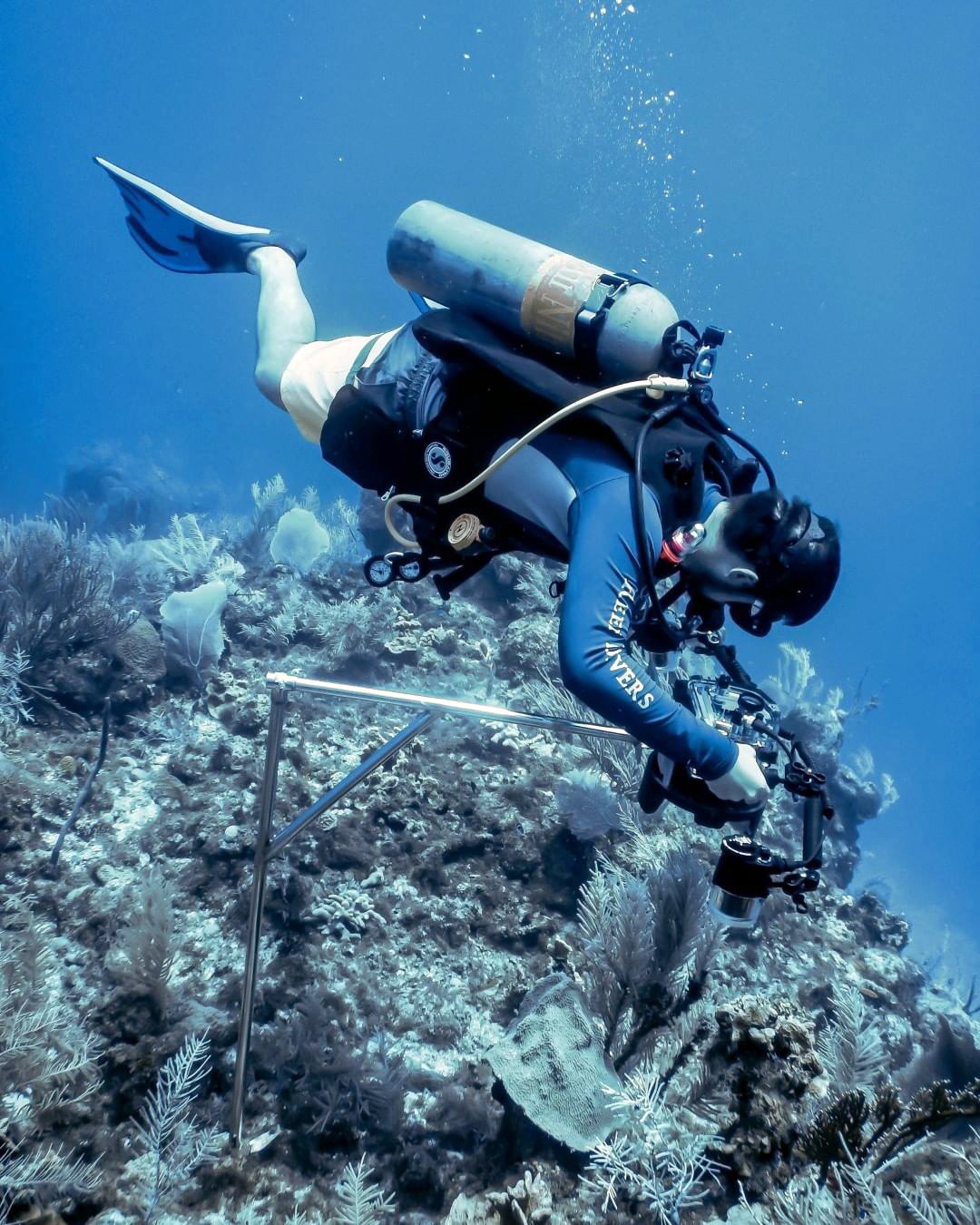 Corals live in colonies made up of hundreds or thousands of tiny animals called polyps that attach to hard surfaces on the seafloor. They are related to jellyfish and sea anemones in the phylum Cnidaria, but have a hard external skeleton that they build by drawing calcium carbonate from the surrounding seawater. They are found in a variety of shapes and sizes and some produce massive skeletons that collectively form the limestone framework of tropical coral reefs.

Coral cover in the Cayman Islands

The Cayman Islands is located on the Cayman Ridge, which extends from southeast Cuba to the Bay of Honduras. The three islands are flanked to the south by the Cayman Trench, the deepest area of the Caribbean Sea at approximately 25,216 feet (7,686 meters) below sea level. These low lying limestone platforms with narrow island shelves support prolific coral reefs. The coral reefs in Cayman are a crucial part of the bustling tourism industry. Each year divers from around the world travel to see these marine creatures. Coral reefs form complex and diverse ecosystems that take up less than 0.1% of the ocean floor but provide habitat for approximately 25% of all marine species. This, in turn, provides billions of dollars worth of economic value to people every year through fisheries, tourism and protection from storms. Stony Coral Tissue Loss Disease (SCTLD) is a new and deadly coral disease currently affecting Cayman’s reefs. For more information, visit: https://doe.kymarine/SCTLD

On Grand Cayman, average coral cover declined from 30-50% in 1980s to 10-20% at present, probably because of cumulative stress from bleaching events, coral diseases, hurricanes and algal overgrowth. Coral bleaching is predicted to occur every year on 99% of coral reefs within the 21st century due to climate change and the rise in ocean temperature. As events become more destructive and more frequent over time, the livelihoods of 500 million people and income worth over $30 billion are at stake.

Corals exist because of an incredible partnership between animal and plant. Reef corals acquire the majority of their energy and nutrients from single celled algae called zooxanthellae (zoos) that live inside the coral polyps. Like other plants, zoos get their energy from photosynthesis and are the reason behind a corals colourful appearance. When sea surface temperatures rise beyond their threshold, stress causes this partnership to break down. The photosynthetic system within the algae starts to accumulate reactive oxygen molecules which leak into the polyp cells. To protect themselves from damage the corals expel the zoos out of their system and corals turn ghostly white. This process is known as coral bleaching.

Some corals may bleach, while other coral species in the same location may not. Individuals of the same species may also bleach at different rates, like the starlet coral (Siderastrea siderea) colonies in the featured image below. This is because, just as there are many species of coral, there are many species of zooxanthellae that live inside them. Different types of zooxanthellae have different resistance to high temperatures. Therefore, corals that survive bleaching events may do so because they contain the more tolerant types. What happens next depends on how severe high temperatures become and how long they last. Corals can repopulate themselves with zoos within a few weeks, if the water cools back down fast enough. If not, the coral will die from starvation or cumulative stressors such as disease.

If reefs die, the dead area can be colonised by macroalgae which competes with corals for space. This is why it is important to have plentiful herbivores on our reefs. They are effectively the “lawn mowers” of our reefs, keeping the ecosystem balanced and healthy.

Even if corals recover from bleaching, the weakened corals are often more vulnerable to disease. Globally, more than 20 different coral diseases have been described by scientists. Of these, less than half have been due to an infection, leading scientists to believe that environmental conditions are just as likely to cause coral disease.

An outbreak of white band disease emerged in the US Virgin Islands in 1977 and spread throughout the Caribbean over a period of about a decade, devastating populations of two critical foundation species, Acropora palmata (elkhorn) and Acropora cervicornis (staghorn). Branching corals used to be the dominant species on Cayman’s reefs but this outbreak devastated populations and led to a region-wide decline of 90-98%!

While coral diseases, bleaching, hurricane damage and other natural stressors have probably affected reefs since they first developed, the impacts have worsened over the last three decades, partially because they appear to be exacerbated by localized human impacts. These include agricultural and industrial runoff, pollution from sewage, overfishing, increasing acidity and warming linked to global climate change. When a coral reef bleaches, it is affects the entire ecosystem present on that reef, from the fish to the invertebrates. Corals can recover from bleaching by growing back their algae, bringing back their vivid colouration. A reef highly stressed from overfishing and pollution will have a harder time recovering than an area protected from local threats. The year 1998 was the biggest global bleaching event to date, during which the world lost 15-20% of its coral reefs. A mild El Niño weather event occurred in 2010, leading to a similar, less-severe pattern of coral bleaching. Combination of climate change with El Niño events will bring more frequent bleaching episodes.

When a ship or boat runs aground, it can cause harm to coral reefs, seagrass meadows, mangroves and other essential habitats. These environments are critical to the economy and culture of the Cayman Islands. Ships that ground on coral reefs may cause immediate and long-term harm and can destroy hundreds of years’ worth of coral growth. Fuel, oil, and other chemicals may leak from the vessel, and paint may be scraped from the hulls, causing injury to corals and other habitats. If the vessel is not removed immediately after grounding occurs, fuel or chemical leaks, as well as additional vessel movement due to wave action, may continue to harm marine species and the environment. With this in mind, it is important that the industries that use hazardous chemicals do everything in their power to avoid leaks and spills when transporting dangerous goods at sea. You can learn more about some of the different types of dangerous goods by checking out this storemasta dangerous goods classes guide. Additionally, if a vessel is salvaged, further damage may be inflicted on the habitat during the removal from loose debris, anchors, or cables.

After grounding incidents occur, coral reefs can be repaired to a certain extent. By mixing cement and gluing the corals and structure back onto the substrate, we can help to restore their environment and give them a head start to recovery.

What can we do to help?

Think globally act locally: Anyone can go about being a good steward of their environment. Just ask yourself: What can I do to reduce my fossil fuel consumption, my carbon footprint?

When you visit coral reefs or coastal areas: Finally, stay informed and spread the word! Educate yourself about why healthy coral reefs are valuable to the people, fish, plants, and animals that depend on them. Your excitement will help others get involved.
Scroll to Top