A collaborative conservation program between REEF and the Cayman Islands Department of the Environment studying Nassau grouper (Epinephelus striatus) – a social and ecological corner stone of Caribbean’s coral reefs.

What are Nassau Grouper?

Normally solitary and territorial, during the winter full moons grouper travel, sometimes over great distances, and “group” together to spawn. About fifty of these spawning aggregations sites have been recorded in different places throughout the Caribbean. Historically, once discovered, grouper aggregation sites have become synonymous with fisherman aggregation sites. Due to the timing and site fidelity of the spawning aggregations and the ease with which these relative loners can be caught while congregating by the hundreds and thousands to spawn, one-third to one-half of the known Caribbean aggregation sites are now inactive. The Cayman Islands used to be home to five Nassau grouper (Epinephelus striatus) spawning sites. Today, four of these sites are dormant or depleted. But one site, on the west end of Little Cayman Island, is home to one of the last great reproductive populations of this endangered species. 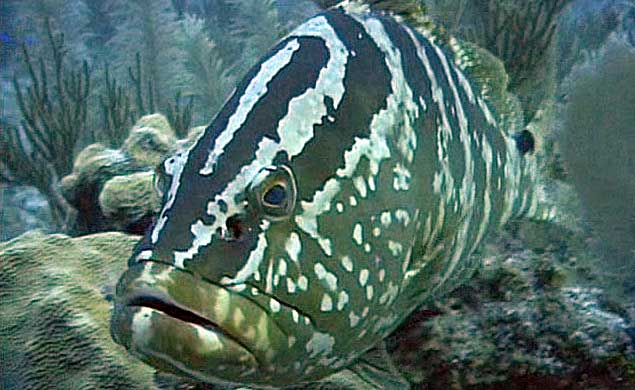 In the Winter of 2002, REEF launched a ground breaking expedition to the Cayman Islands – the Grouper Moon Project. The Project’s objectives were to observe the Nassau grouper spawning aggregation off the western tip of Little Cayman, and to develop a protocol for monitoring their numbers and activity at the site. For two weeks, a team of divers from REEF and the Cayman Islands Department of Environment visited the aggregation site and nearby reefs. Since that first year, REEF has coordinated annual efforts to monitor and study the Little Cayman Nassau grouper aggregation. The project has grown in scope to include an ambitious acoustic tagging research project, juvenile habitat and genetics studies, and early results have been published in the scientific literature. Components of the project include:

The Grouper Moon Project is a collaboration between REEF and the Cayman Islands Department of the Environment. REEF extends a huge thanks to the CIDOE staff for their tireless efforts, including Phil Bush, Bradley Johnson, Croy McCoy, James Gibb, Tim Austin, Gina Ebanks-Pietre, Keith Neale, Delwin McLaughlin, and Robert Walton. The Grouper Moon Project has continued through the years empowered by the first year’s success and the passion of project leader Leslie Whaylen Clift.

Generous logistical support has been provided throughout the years by Peter Hillenbrand, as well as by local dive operators at the Little Cayman Beach Resort/Reef Divers and the Southern Cross Club. Brac Reef Resort has provided lodging support for education efforts on Cayman Brac. Cayman Airways has provided inter-island travel support. Grants from the Disney Worldwide Conservation Fund, beginning in 2011, have supported field efforts, the Baby Grouper Adrift webpage, several outreach products, and the development and continued coordination of the Grouper Education Program. A research grant from the Lenfest Ocean Program at the Pew Charitable Trusts funded the project between 2008-2011. Funding for the acoustic work was provided in 2009-2012 by the NOAA International Coral Reef Conservation Program, the J. Edward Mahoney Foundation, and PADI Project AWARE. Additional funding has been provided by hundreds of REEF members. Wayne Sullivan and his crew of the Glen Ellen has provided generous field support since 2009. Raymarine Marine Electronics donated RADAR equipment to assist the CIDOE in their enforcement efforts. To alleviate the constraints of diving deep depths on regular scuba, several other sponsors came on board to assist in the project, including Divetech and PM Gas of Grand Cayman, Silent Diving of Brockville, Ontario and Shearwater Research of Vancouver, British Columbia. LIME Cayman Islands has provided support for the live-video feeds for the Grouper Education Project since 2012. Pegasus Thrusters supported the project in 2013 through the donation of Diver Propulsion Vehicles.