In February 2008 a juvenile Red Lionfish was removed from a dive site in Little Cayman and since then many others have been removed from Grand Cayman, Little Cayman and Cayman Brac. While it may seem exciting to see this fish on a dive it is quite disturbing when you realize that this species was only supposed to be found in the Indian and Pacific Oceans.

So what’s it doing in the Atlantic Ocean? While no one knows exactly how they arrived in the Atlantic, the most accepted method is the accidental or intentional release of aquarium fish into the marine environment. Lionfish are now established along the entire US East Coast from Florida through Massachusetts, east to Bermuda and throughout the Caribbean and Gulf of Mexico in depths ranging from 1 to 1,000 feet! 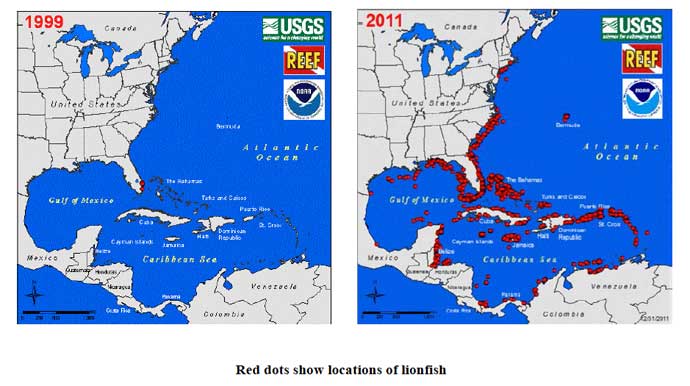 Allowing lionfish to establish themselves in our waters can lead to serious problems because they are:

It is well established that red lionfish will stand their ground when harassed and, when threatened, can arch their backs, pointing their dorsal spines at the aggressor, and swim forward rapidly in order to inflict a sting. Poisoning of the hand from the venomous sting has been the most common injury.

It should also be stressed that serious wounds have also resulted from the careless handling of recently dead specimens. 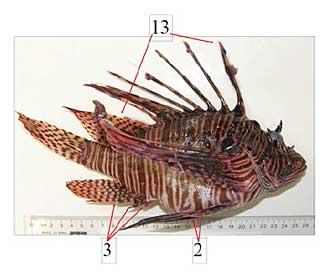 The lionfish has 18 venomous spines. 13 are on the top of the fish and the remaining 5 are on the bottom.

The sting of the red lionfish causes intense pain immediately and leads to several hours of extreme pain, depending upon the amount of venom received. To treat lionfish stings you should immerse the affected area in hot but non-scalding water for two to three hours and seek medical attention immediately!

When diving, especially in a wreck, cave or swim-through, be aware of the areas above you as lionfish are able to rest, upside down, on the ceilings and walls of these features. Divers have been stung by lionfish they were not aware of.

If they are caught while fishing do not release them back into the ocean.

For these reasons the Department of Environment (DoE) has taken the stand that these fish must be removed from our waters, however, due to the venomous nature of the fish we ask that only licensed individuals attempt to cull them.

If you are interested in being licensed, or learning more about the lionfish, please attend one of our training courses which are offered monthly. Contact us for more information or email us to be added to the notification list for future courses. Phone: 345-949-8469, Email: DoE@gov.ky 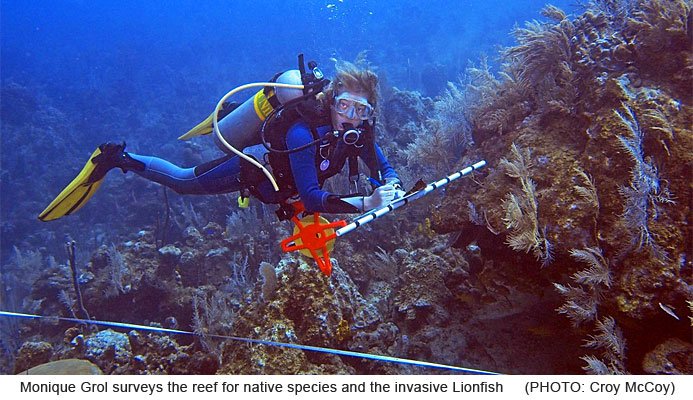 FOR MORE INFORMATION on Lionfish in the Cayman Islands, CLICK BELOW:

Lionfish are extremely venomous. Do not attempt to catch one without DoE TRAINING.