Mature turtles only visit our waters during the breeding season – migrating thousands to kilometers to nest on our beaches.

Where do our green and loggerhead turtles live when they are not nesting? Satellite tracking tracking is the only way to follow them from the Cayman Islands to their feeding grounds in distant countries.

With the help of schools and the community, DoE has tracked Cayman turtles across the open ocean to their adult foraging grounds in Mexico, Belize, Guatemala, Honduras, Nicaragua, and the Florida Keys. 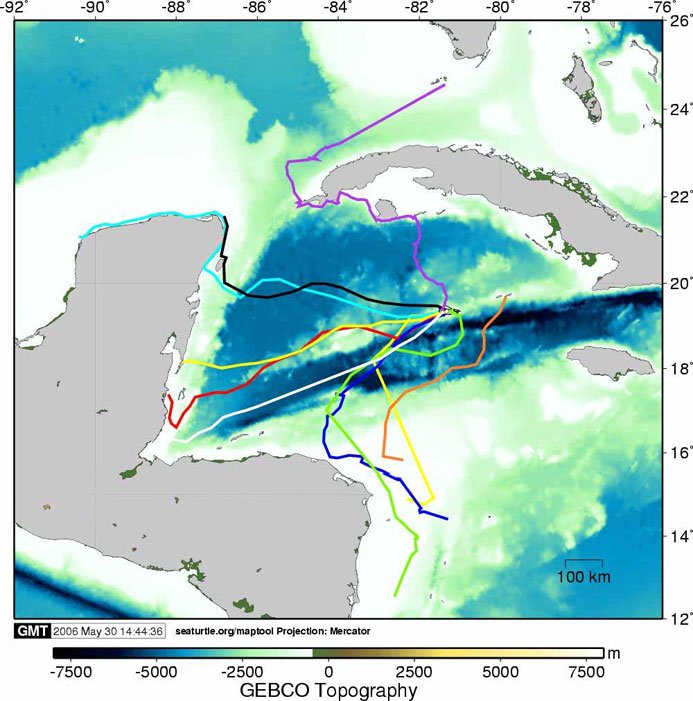 The DoE has carried out an in-water monitoring programme since 2000. Turtles are captured, tagged, and released in our waters to assess population trends and determine migration patterns, growth rates, habitat utilization, and diving behavior.

By using the turtles’ DNA as a kind of genetic bar-code, we have discovered that young hawksbill turtles in the Cayman Islands hatched in distant parts of the Caribbean – on nesting beaches in Central America, Mexico, and the Eastern Caribbean. This means that young turtles seen in Cayman waters have already travelled hundreds or even thousands of kilometers from the beaches where they hatched by the time they reach us. 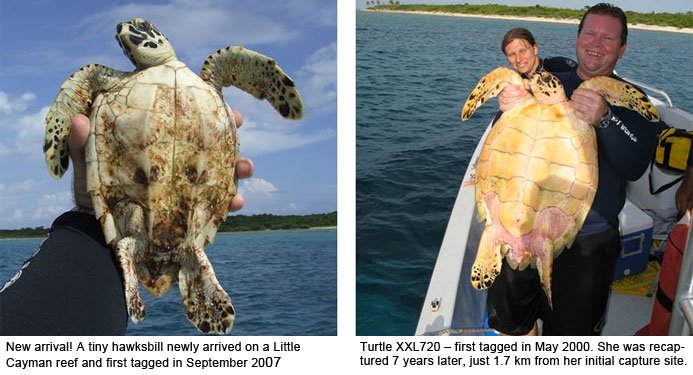 The youngster pictured (photo above left) was first tagged in September 2007. She spent the first few years of her life drifting with the currents in the open ocean, before moving to a reef in Little Cayman at a size of approximately 20 cm (8′).

Turtle #XXL720 (photo above right) was first tagged as a small juvenile in May 2000. When she was recaptured in September 2007, she had reached a size of more than 55 cm – growing at a rate of just over 2 cm per year.

Through long term monitoring and multiple recaptures, we have discovered that Cayman hawksbills grow slowly and may live in Cayman waters for over 15 years. Thus, they benefit from our protection during this vulnerable period in order to survive to adulthood.

Juvenile hawksbills from across the Caribbean use our waters as a nursery habitat – but as they near maturity, they seem to leave, bound for faraway foraging grounds. Where do they go? In April 2007, we received our first international tag return: a hawksbill tagged in Little Cayman in 2000 was captured in Honduras and in 2009 two green turtles captured in Grand Cayman in 2000 and 2005 were captured in Nicaragua.

Perhaps XXL720 has already left our waters. She will live in an adult feeding ground in a distant country, returning to her birth place every few years to breed and nest.

Within the reefs and lagoons of the Cayman Islands, we have studied diving behavior and movements of our hawksbill and green turtles by using Time Depth Recorders and Acoustic Tags. Using these technologies, we have determined that our turtles can dive deeply on the Cayman wall – reaching depths of at least 300 ft.