24 April – An international effort aimed at tracking some of the Caribbean region’s most important avian predators is under way, thanks to a newly obtained U.K. Darwin grant provided by the Department for the Environment, Food and Rural Affairs (Defra).

The initial tagging effort took place in March and April and the live tracks of the birds’ foraging trips are already being streamed into an online bank of data. The tracking devices last up to nine months and tagging efforts will continue through July. 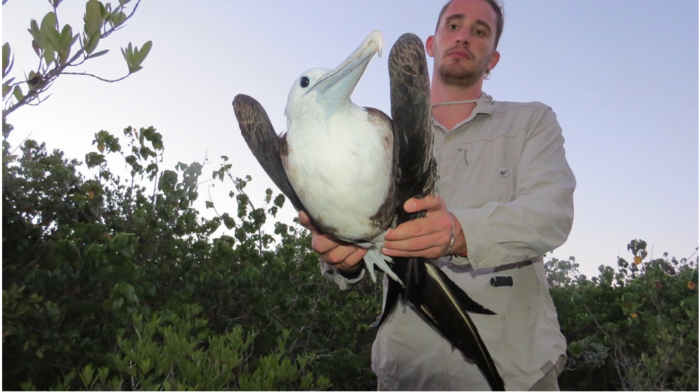 “Seabirds, as apex avian predators, are effective indicators of marine biodiversity hotspots and ocean health,” said Ms. Haakonsson. “This study will help us track the frigatebirds over long distances, so we can learn, among other things, whether they have established connections between bird colonies in the region. Such data on ecosystem connectivity is important to inform resource managers.”

Ecosystem connectivity is the functional links between ecosystems in different locations. Connected ecosystems that provide for animal and plant migration can help sustain natural areas, even if they are close to human population centres.

The Darwin-funded project will continue to track both adult and juvenile magnificent frigatebirds using Global Positioning System (GPS) – Global System for Mobile communications (GSM) loggers from multiple populations in the Caribbean British Overseas Territories including Anguilla, the British Virgin Islands and the Cayman Islands. These data will inform regional-scale marine and coastal zone management, defining and designating vulnerable wetlands and marine habitats throughout the Caribbean.

Scientists will use movement data from Caribbean magnificent frigatebirds to support and help define the need for protected areas onshore, nearshore and offshore that can then be used to support regional conservation management.