In 2015 the SDU (as part of the DoE’s Technical Review Committee) reviewed 58 planning applications and 25 coastal works applications. These applications ranged from small-scale coastal developments through to large-scale Planned Area Development (PAD) applications.

Of the 25 applications, the DoE did not recommend any coastal works applications for an EIA. 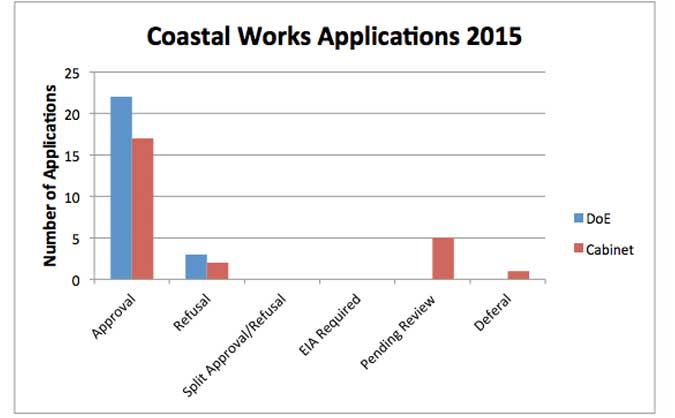 67% of these applications were approved by the Central Planning Authority (CPA), 3% were refused permission, 3% were deferred and 26% were pending a decision by the CPA. 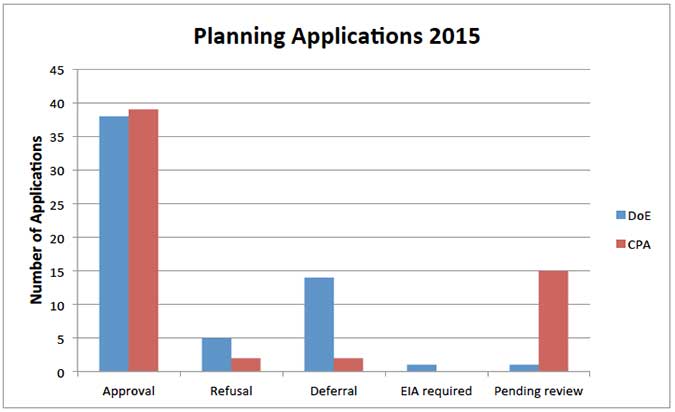 The SDU was heavily embroiled in the EIA for the proposed cruise berthing facility, with 2015 seeing the finalization of the EIA and its associated public consultation. Staff reviewed the draft and final Environmental Statement (2,000+ pages long) and contributed to the Department’s written feedback on the document. Over 400 written submissions were received in respect of the draft Environmental Statement – the SDU collated all of these responses.
OTEC International continued its data collection for the EIA associated with its proposed ocean thermal energy conversion project on the north coast of Grand Cayman. The Environmental Statement is due imminently. 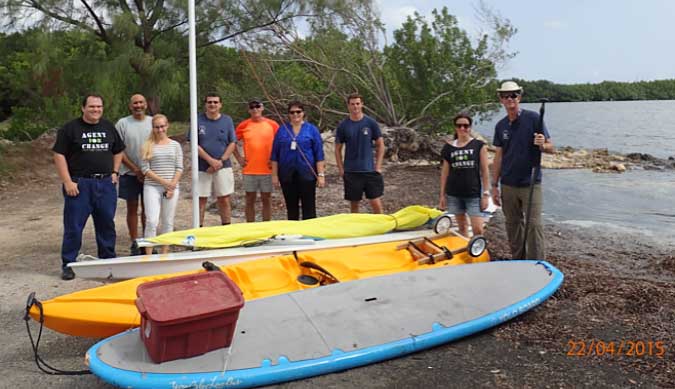 Environment Breaks – were recorded on a range of topics including the proposed cruise berthing facility EIA; fishing line poster competition; the dangers of unwanted fishing line in the sea; fishing line recycling; earth day and reducing your carbon footprint.

Factsheets – a factsheet was prepared and distributed regarding the influx of Sargassum seaweed in the summer.

Fishing Line Recycling Initiative – The SDU and MRU launched a poster competition to encourage students to become more aware of the dangers of unwanted fishing line in the marine environment and submit posters to portray these dangers. Over 100 entries were received from schools on Grand Cayman and Cayman Brac and the winning entries were turned into signs which are now displayed with 40 fishing line recycling bins which have been installed at boat ramps, shore dive sites, and fishing supply shops. Installation of several more bins is planned. The purpose of the bins is to prevent entanglement of turtles, birds, and other wildlife by encouraging the removal of unwanted fishing line from the shoreline and marine environment – the outdoor bins were constructed and installed by the SDU and Janice. The entire initiative was funded by Atlantis Submarines, with further fund being received from Cayman Turtle Farm to publicise the bins.

Collected line that is in good condition will be sent overseas for recycling to produce fish habitats and other products. Line that cannot be cleaned for recycling will be destroyed. Our goal for the coming months is to organise the first overseas shipment of line and raise awareness of the programme. We have developed a PSA for Radio Cayman and will be developing a video PSA and seeking other opportunities. 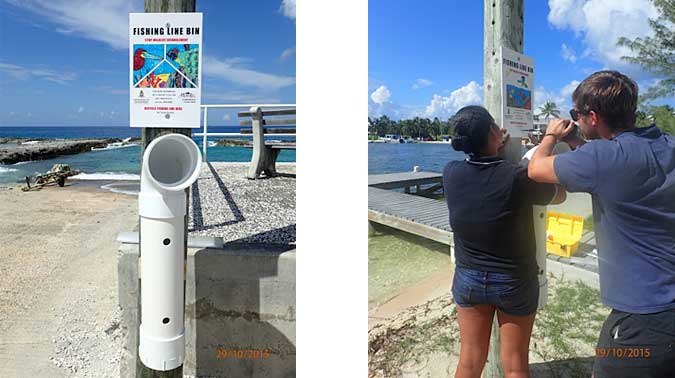 The Department recycling campaign has been well-supported by staff; the quantities of cans, plastic, glass and cardboard recycled during 2015 are detailed below. Thanks to this fantastic effort, over 3,200 pounds of trash was diverted from the George Town landfill in 2015.