Snails arrive on islands either by being dropped by a bird, attached to a floating log or object that has been blown to sea or by accidentally being transported by boat. All of the snails on the Cayman Islands are completely harmless. 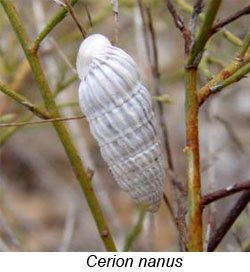 The Little Cayman Snail is an endemic land snail on Little Cayman, hosting an intricate, light gray or brown shell about a centimeter long – half the size of the more commonly found species Cerion pannosum. First described in 1888, this species feeds only on the shrub Evolvulus squamosus. In fact, they are only found on one patch (which is approximately the size of a tennis court) , making this species not only “Critically Endangered” on the IUCN Red List but it is also one of the most restricted snail populations…on earth.

During the dry season, the snails hide in rocks, dead wood or in the very bottom of the Evolvulus squamosus shrub. During the wet season they are more visible, attached to higher parts of the shrub. 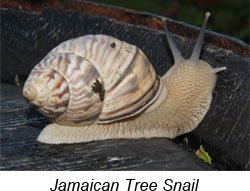 Originally from Jamaica, it has been suggested that this species arrived onGrand Caymanin the 1930’s as juveniles on potted plants. Their shell is much larger than the Little Cayman Snail with 4- 5 large whorls with deep purple bands over a light brown base colour. As their name suggests they are most often found on tree trunks and branches. None currently are found on Little Cayman or Cayman Brac but they have the potential to spread. 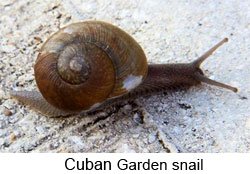 This species was introduced in Florida from Cuba, and most likely invaded the Cayman Islands through the Floridian nursery trade. Most prominent in the rainy season, they eat ornamental plants such as Bougainvillea and are considered huge garden pests to horticulturalists. Like the Jamaican Tree Snail, they have only been found on Grand Cayman but could potentially spread to the Sister Islands.