The Cayman Islands supports many species of spiders. Many species are likely still to be discovered.

Most spiders are harmless to humans; however there are several species of spiders in the Cayman Islands which are potentially harmful. Being able to identify these species is a useful skill.

When it comes to “dangerous” spiders:

When dealing with spider bites, several factors are important: 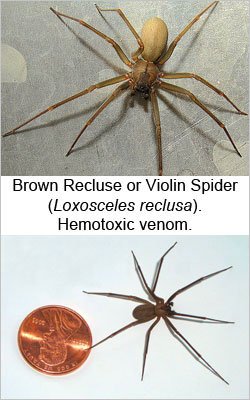 The Brown Recluse or Violin Spider Loxosceles reclusa is small, brown and unremarkable in appearance (see image below). It can be identified by the small, dark violin shape (from which it takes its name), situation on the top of the thorax (see image above).

Recluse spiders build irregular, disorderly webs, often in woodpiles and sheds, closets, garages, and other places that are dry and generally undisturbed. In houses, they often favor cardboard – they have also been encountered in shoes, inside dressers, in bed sheets, in clothes stacked or piled or left lying on the floor, inside work gloves, behind baseboards and pictures, and in toilets. Learning how to clean baseboards and other places could help enjoy get rid of spiders in your home.

As suggested by its name reclusa (recluse), the Brown Recluse is rarely aggressive. The fangs of the brown recluse are tiny, so they are unable to penetrate most fabric. The spider usually bites only when pressed against the skin, such as when tangled within clothes, towels, bedding, inside work gloves, etc. Many human victims report having been bitten after putting on clothes that had not been worn recently, or had been left for many days undisturbed on the floor.

The bite frequently is not felt initially and may not be immediately painful, but it can be serious. The bite produces a mild stinging, followed by local redness and intense pain within eight hours. A fluid-filled blister forms at the site and then sloughs off to leave a deep, enlarging ulcer. The brown recluse bears a potentially deadly hemotoxic venom. Most bites are minor with no necrosis; however, a small number of bites do produce severe necrosis. A smaller number produce severe cutaneous and systemic symptoms. 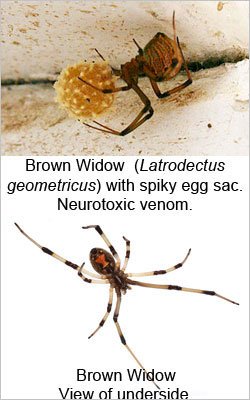 The Brown Widow Latrodectus geometricus is fairly common in the Cayman Islands. The body colour is variable, from tan to dark brown and black. Like its more famous cousin, the Black Widow, the Brown Widow has a prominent hourglass-shaped marking on the underside of the abdomen; the brown widow’s hourglass, however, is usually a orange or a yellowish color, rather than red. The easiest way to distinguish a Brown Widow from a Black Widow is by the appearance of the egg sac. The Brown Widow has a spiky egg sac, shapped like a sandspur, a grass burr, or the head of a medieval mace.

The symptoms of Brown Widow bites generally seem to be less severe than those of Black Widows. There is some debate as to whether the vemon of Brown Widows is less toxic than that of Black Widows, or whether it is simply a matter that they inject less venom. First aid involves the application of an ice pack to control inflammation, and prompt medical care. If it can be easily captured, the spider should be brought with the patient in a clear, tightly closed container so it may be identified. 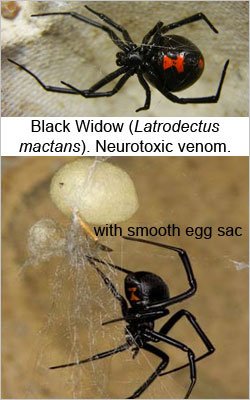 Black Widows Latrodectus mactans are related to Brown Widows, and closely resemble them in appearance, though Black Widows are generally darker (black) in appearance. Both spiders have an hourglass shape on the underside of the body. In the case of the Black Widow, this is generally bright red.

Black widows can also be distinguised from Brawn Widows by the shape of their egg-sac, the surface of which is smooth, unlike the spiky surface of the egg sac of the Brown Widow. Although serious, a Black Widow bite is rarely lethal. The bite feels like a pinprick. The victom may not even realise that they have been bitten. First symptoms are generally light swelling and faint red marks. Within a few hours, though, intense pain and stiffness begin. Other signs and symptoms include chill, fever, ausea and vomitin and severe abdominal pain. 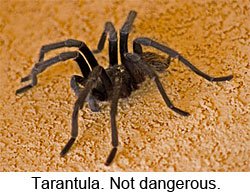 Cayman plays host to at least one species of tarantula, (appearing similar to the one in the image above). While tiny in comparison with most Tarantulas, with a body diameter of a little over a centimeter, the species found in the Cayman Islands is still constitutes a good-sized spider, albeit resembling a perfect miniature version of more familiar species.

Tarantulas have large jaws and so have the potential to inflict a bite which may be physically painful, but not toxic. Like most Tarantula species, the Cayman tarantula is fairly docile and can be handled with appropriate care.

Many tarantula species have the capacity to eject irritant hairs from their bodies. This can cause irritation to the skin, however, these hairs can cause a serious problem if they get into the eyes. For this reason, when handling tarantulas, they should always be kept well away from the eyes and face.

If bitten by a spider: 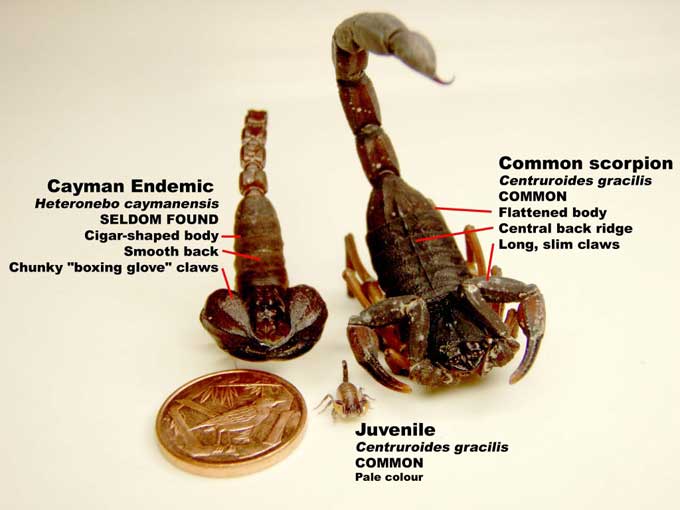 There are no recorded deaths from scorpions in the Cayman Islands, however all scorpions should be treated with respect as their stings can be very painful.

Scorpions deliver a sting from a barb located at the end of their tails. Scorpion venom is designed to immobilize and kill prey species (beetles, crickets, roaches, worms and other invertebrates), but the mixture of compounds in scorpion venom can also cause problems for none-prey species (such as humans, cats and dogs), if they are stung.

The amount of venom injected by a strike varies greatly, even within successive strikes from the same individual. Many strikes are “dry strikes” in which no venom is injected at all. This means that, if you are stung by a scorpion, it is difficult to know how much venom you have received, if any.

Symptoms of a scorpion sting will vary from person to person. In general, however, the first sensation will be a short, sharp pain from the stab of the barb. If venom is injected, this may be followed by spreading feelings of pain and numbness around the affected area. A feeling of swelling, tightness and burning may be experienced, along with some inflammation spreading out from the affected site. Numbness in the lips and tip of the tongue (similar to the sensation of a dental injection) may also be experienced. Symptoms may last for a about an hour.

If symptoms are mild, and you prefer to self-treat:

Scorpions are nocturnal and prefer dry areas. They are attracted to narrow cracks and crevices. In the wild their habitat includes the spaces under stones, and beneath peeling bark. They will often emerge en-masse in the event of heavy rains and flooding, in search of dry ground.

Scorpions are naturally attracted to narrow spaces, and this propensity also attracts scorpions to man-made environments: wood piles, under plant pots, door jams, the undersides of drawers, between books, behind pictures and shelving, inside piles of laundry, folded towels, and under bed sheets.

Scorpions are adept climbers and can easily scale a tin guttering to gain access to a house through a hole in the roof or missing soffit. The gaps beneath doors are also a favored means of entry into homes.

Once scorpions are inside you house, they can be difficult to locate and control, so prevention is better than cure. If you have a similar situation, i.e. welcoming unwanted scorpions/ spiders into your home, you might want to consider having a look into some ways to control, and then remove them! One way this could be done is by finding a spider control specialist to help you out!

Ensure you house is in a good state of repair. Replace missing roof tiles and broken soffits. Ensure doors are well-fitting and use brush guards or rubber guards to plug gaps around the frames. Do not leave your doors open unnecessarily, especially during heavy rain.

If you keep a woodpile or plant pots, try to move them some distance from your doorway.