The Cayman Islands have a variety of beautiful, unique or vulnerable animals, all of them interesting.

There are not many dangerous animals in the Cayman Islands; however being able to identify which species are potential hazards and which are harmless can be a useful skill.

Many people are scared of snakes. The good news is that there are no dangerous snakes native to the Cayman Islands.

CLICK to learn more about Cayman Islands reptiles and snakes.

Several species of spiders are to be found in the Cayman Islands which the potential to inflict a serious bite. All spider bites should be treated with care. Even mild bites can become infected if they are scratched or not cleaned properly – indeed infected cuts and wounds are often confused for spider bites. Brown recluse or Violin spider are to be avoided.

CLICK to learn more about Cayman Islands scorpions and spiders. 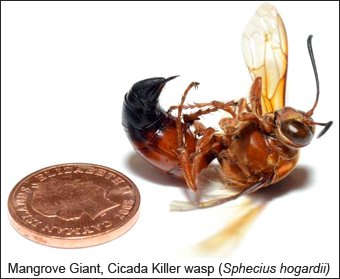 Several species of bees and wasps are to be found in the Cayman Islands – many with the potential to deliver a painful sting.

While not usually more than an irritant, some people can have an allergic response to the stings of bees and wasps, resulting in life-threatening anaphylaxis. Wasps nests are often encountered beneath the eaves of buildings, so special care should be taken when working in these areas, especially when working from a ladder. Swarms of bees are an occasional occurrence. Swarms of bees should be avoided, and dealt with by trained professionals. Though rare, deaths of both people and pets have occasionally resulted from attacks by bee swarms in the Cayman Islands.

If you attacked by a swarm of bees, you should run for the shelter of a nearby house or car. Do not stop to assist pets. Keep your mouth closed to avoid potentially life-threatening stings inside the throat. For professional bee removal call Winston Anderson 327-6284.

Care should be taken when handling any caterpillars, unless your are familiar with the species. Many caterpillars are equipped with defensive hairs which can be highly irritant to some people. Even caterpillars which appear “hairless”, such as the Tetrio sphinx moth caterpillar (pictured) often have irritant hairs. 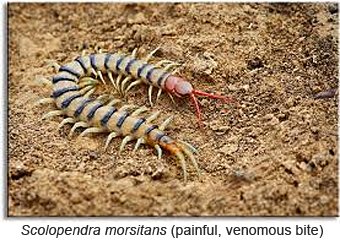 Several species of centipedes are to be found in the Cayman Islands. The most common species you are likely to encounter is the formidable Scolopendra morsitans. These large, fast-moving centipedes are highly armored, fast-moving and difficult to catch. Their segmented body is green / black, and the head and tail are bright red / orange in colour.

Scolopendra morsitans should be treated with care. This centipede has a painful and venomous bite. Even their feet can be highly irritant, producing raised spots of inflammation in “tramlines” across exposed skin. To these ends, centipedes should never be handled.

FIRST AID FOR BITES AND STINGS 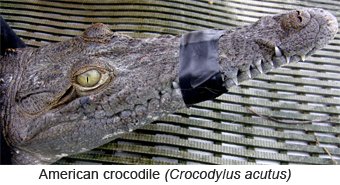 The Cayman Islands take their name from their once-common crocodile populations. Numerous in the fossil record, it appears likely that the early sailors (who named the islands after the crocodiles) were also responsible for their extinction.

While extirpated in the Cayman Islands in historical times, individual crocodiles occasionally make it to the islands, likely swimming from Cuba or Jamaica, (perhaps assisted by floating debris). Attacks on people, worldwide, by the American and Cuban crocodile are exceedingly rare, and in almost all cases are in association with people trying to catch, goad or kill the crocodiles. Unprovoked attacks are rarer still.

The American crocodile is protected by national legislation in Florida, and under the international Convention on Migratory Species (CMS) and CITES; both of which are extended to the Cayman Islands. 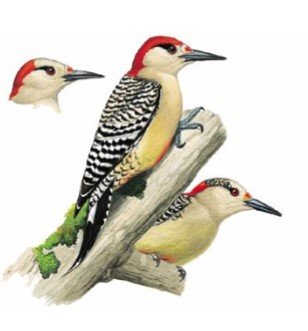 For tips on how to deter woodpeckers from your home, please click the picture to link to the Terrestrial Resources Unit’s Flicker article on the subject! Remember, these birds are protected under the National Conservation Law (NCL).

Most of us enjoy seeing the two endemic subspecies of woodpeckers which belong to Grand Cayman; the West Indian Woodpecker (Melanerpes superciliaris caymanensis) and the Northern Flicker (Colaptes auratus gundlachi). However, during nesting season (January to August, but mainly April and May), the woodpeckers are increasingly favouring houses over natural nest sites, especially houses with façades built of Styrofoam blocks with a marmoran finish! Natural habitats, such as living and dead tree cavities (Black Mangroves, Royal Palms and Silver Thatch palms, in particular) are getting increasingly scarce in most areas on island and the Styrofoam makes for easy excavation. 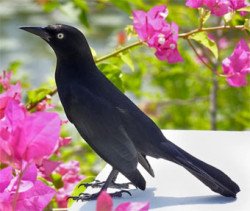 Ching chings (Greater Antillean Grackle, Blacksmith) Quiscalus niger are a common sight in the Cayman Islands. Their bold and intelligent nature combined with their broad omnivorous diet enables them to readily adapt to urban environments.Ching chings are extirpated in Cayman Brac, however, both Grand Cayman and Little Cayman host endemic subspecies of these birds, which are not found elsewhere in the world (Quiscalus niger caymanensis on Grand Cayman and Quiscalus niger bangsi on Little Cayman). For this reason, Ching chings are protected under both the current Animals Law and the draft National Conservation Law – which make it an offense to harm or disturb wild birds, their nests or eggs.
Defensive Behavior
Ching chings and their human neighbors live peaceably, side-by-side for most of the year. However, during the nesting period (March-July), this relationship can become strained. When nesting, Ching chings defend themselves gainst anything which they think may threaten their nests. 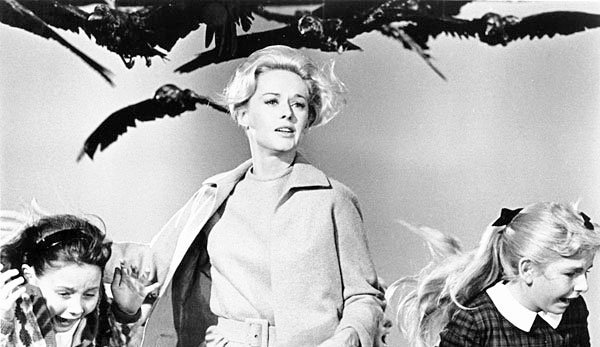 The level of aggression the birds display increases as their eggs hatch, and they begin to rear their chicks. During this period, they will defend their nests against all intruders, regardless of size. Cats, dogs and humans who venture close by will be viewed as potential predators.In most cases, this defensive behaviour takes the form of swooping down, close to the head of the intruder. Swoops are often accompanied by wing-flapping and high-pitched calls, designed to scare off a potential predator. In some cases, the birds may even make contact with the head. While not dangerous, a strike can be painful, and shocking if it is unexpected.
Urban Environment
In the wild, such conflict situations rarely arise; however, as the urban environment has come increasingly to encroach upon the natural environment, the natural nesting sites of Ching chings have become more scare. This has encouraged the birds to seek out new places to build their nests. 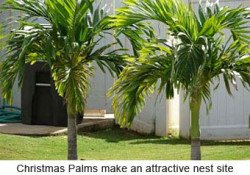 In the urban environment, the best nest site for Ching chings is in Christmas Palms – the exotic miniature palms which are now so prevalent in Cayman’s urban landscaping. Unfortunately, people often plant these palms in parking lots and beside walkways and doorways. The point at which the palm fronds attach to the trunk of the tree forms a small, cup-shaped structure. This is the perfect shape and size of a Ching ching to build its nest.Bringing the birds into close contact with people in this way can trigger their defensive behaviour during the breeding season.The best course of action is to discourage Ching chings from nesting in areas which will bring them in to close contact with people:
Nesting Ching ching
If Ching chings are already nesting: 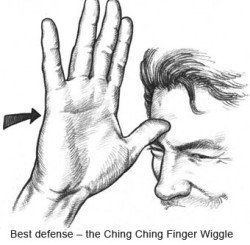