Trees: The Cayman Islands’ dry forest trees include the Cayman Ironwood tree, Chionanthus caymanensis, whose wood is so heavy and hard that it sinks in water. 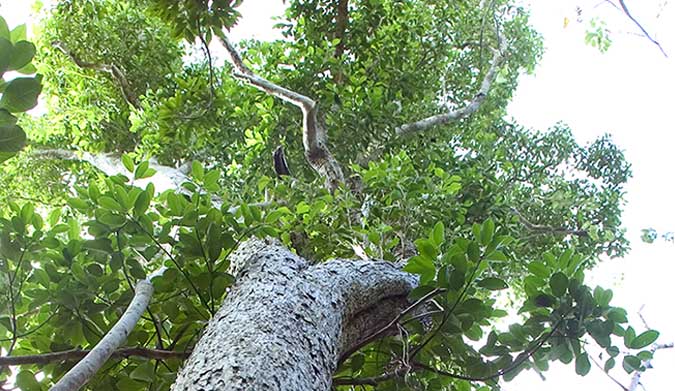 This tree is unique to the Cayman Islands, like our Silver Thatch Palm Coccothrinax proctorii, and the Black Mastic tree, Terminalia eriostachya var. margaretae.

Shrubs: Probably our most conspicuous endemic shrub is the Corato, Agave caymanensis, which grows in shrulands on all three of the Cayman Islands, and nowhere else in the world. Other uniquely Caymanian shrubs include two endangered cacti that are unique to Cayman Brac and Little Cayman – Harrisia caymanensis, and Consolea millspaughii var. caymanansis.

Herbs: The critically endangered Grand Cayman Sage, Salvia caymanensis, was rediscovered recently after long being thought to have gone extinct. Also only on Grand Cayman , a pink-flowered wetland herb, Agalinis kingsii, thrives in the National Trust’s Salina Reserve. The north cliffs on Cayman Brac are the world’s only home for the attractive white-flowered Verbesina caymanensis, while on Little Cayman the sandy roadsides favour the yellow-flowered Turnera triglandulosa, unique to Little Cayman and Cayman Brac. Many of our unique Caymanian plants are so rare they have never been given colloquial names.