What is an invasive species?

An alien species is when an animal or plant has been taken by humans and introduced into an ecosystem where it is not naturally present. An alien species becomes classified as an invasive species when it can reproduce and proliferate in the ecosystem, causing negative changes. This is different to a native species that normally live and thrive in a particular ecosystem having evolved there over many millennia.

Invasive species are incredibly problematic, as when they take over a habitat they disrupt the natural functions and balance of the ecosystem in question. This can affect the useful services provided by the ecosystem such as pollinating crops, seed dispersal, oxygen and moisture production and water filtration to name a few. Sometimes an invasive species can become so numerous it is a public health or road safety hazard.

Green Iguanas have been present on Grand Cayman for more than 25 years, with only occasional sightings reported in 1994. It is thought there were multiple introductions as the original iguanas were brought over for both pet trade and as a food source. Certain individuals were intentionally released or escaped and their numbers have increased dramatically. The DoE started population surveys in August 2014, and since has shown exponential growth up to concerted control efforts:

Before the start of widespread control efforts on Grand Cayman in November 2018 (updates on this can be found in Flicker publications, issue #39 onwards), the problems of green iguana overpopulation were obvious and effecting daily public life as well as the ecosystem. The issues included, but were not limited to:

Green Iguanas have also made their way to the Sister Islands, but are currently in the initial stages of invasion at very low numbers. If you see a green iguana in the Sister Islands, please call the wildlife hotline with your location immediately to report. Quick responses are needed to capture the individual before it has the opportunity to escape and possibly breed. The DoE works with volunteer response groups to coordinate efforts when a report is made.

To report a green iguana sighting, or on Grand Cayman to have iguanas removed from your property, please call the following numbers:

Cats are kept as domestic pets, however large numbers of unowned feral cats are present across all three islands in urban and natural habitats. Cats have an innate instinct to hunt prey, whether intended as a food source or not. The Cayman Islands are small island ecosystems where there are no natural predators, and native wildlife does not have any defence. Globally, feral cats have contributed to the extinction of 33 species and continue to threaten other critically endangered species where they have been introduced, including in the Cayman Islands.

The blue iguana and Sister Islands rock iguana are directly threatened with extinction by feral cats. Iguanas are vulnerable to predation within the first two years of life, and population data from surveys show young iguanas are becoming rarer to find, with too few iguanas making it to breeding age. Seabirds nesting in the Cayman Islands are also directly threatened with local extinction by feral cats, utilising when they are most vulnerable with their chicks. Sometimes an entire seabird family has been destroyed by cats, as the parents try to defend the flightless chicks.

Companion cat owners can help the situation faced by wildlife by following the steps advised by DoE and Department of Agriculture (DoA):

Brown rats (Rattus norvegicus) and black rats (Rattus rattus) are found in both urban and natural environments across all three islands. Control efforts are implemented by the Department of Environmental Health. DEH have further information with advice and services here: http://www.deh.gov.ky/portal/page/portal/dehhome/districtsanitation/rodentcontrol and here: http://www.deh.gov.ky/portal/page/portal/dehhome/pressroom/2009/preventrodents

A number of exotic birds originally brought as captive pets since escaped or have intentionally been released. Some feral populations have become established in natural areas.

Monk parakeets/ Quaker/ Love bird: These small, predominantly green birds with a grey chest are noisy communal nesters. They create large, sprawling nests that can impede utilities or other high, outdoor structures. They can be differentiated from the native Cayman parrot by their call, size, lack of red colouration around the head and lack of white eye ring. They compete with native birds for food and the nests pose a public safety hazard.

Yellow-naped Amazon/ Honduranian parrot: A similar species to the Cayman parrot, they can be differentiated by their call, bright yellow colouration behind the head, dark beak and golden iris. These birds can hybridise with the Cayman parrot, threatening the native, endemic sub-species. There are potentially other escaped amazon parrots which pose an identical threat, however only the yellow-naped is known to have a breeding population on Grand Cayman.

Peafowl/ peacocks/ peahens: These medium-large, flightless, ornamental birds have very flamboyant green-blue males and dull females. They have a very loud, distinctive call and behaviour, becoming a nuisance if in a neighbourhood. As fowl, they are controlled by the Department of Agriculture

Carrier pigeons/ domestic pigeon/ fancy pigeon/ rock dove: These medium-sized birds come in a variety of colours where the native doves are not predominantly brown or are completely black with a white ‘cap’. Any combination of predominantly white, grey, blue or speckled is a domestic pigeon. While domestic pigeons do not pose a direct, significant threat to the environment aside from competition for food, they are a public nuisance and health hazard in large numbers. When congregating in large numbers, the droppings can cause building damage and if inside, can be a health issue. As breeding stock, they are controlled by the Department of Agriculture

Chickens: Originally imported for agricultural use, many chickens have become feral. They do not pose a direct, significant threat to the environment aside from insect and sapling consumption, but are a nuisance in a neighbourhood and have become a road safety hazard. As fowl, they are controlled by the Department of Agriculture

Goats are kept livestock in Grand Cayman and Cayman Brac. There is very little evidence of their proliferation in natural areas, although this remains a possibility. If feral goats were to enter protected areas with high biodiversity of flora they could radically alter the understorey, threatening rare plants and effecting habitats of fauna.

Goat owners need to keep their livestock secure and controlled at all times.

Sometimes mistaken for a worm or millipede, these very small brown/black snakes can appear in houses. They are harmless, but homeowners may want to have them removed if they become too numerous. The DoE recommend contacting a pest removal company for advice or services.

Easily confused with the native woodslave gecko, the tropical house gecko has been introduced to many Caribbean islands. In some cultures, geckos are considered bad omens or even poisonous, however this is not true at all. Geckos eat a wide range of insects and other small animals, including some that are considered pests suck as cockroaches. Due to this, other cultures see geckos as a good omen and a household stalwart. Tropical house geckos do defecate in one area, and if this is on a light-coloured fabric or tile, can show up. The best way to deter geckos is to deter any of their prey suck as crickets, moths and cockroaches to begin with and ensure the house is well sealed. If they have found a particular area to defecate, there are sprays available such as Go Geko or you can make a DIY pepper spray to use around the faeces.

These medium-sized terrapins are differentiated from the native hickatee (Cuban Slider) by the red patch behind the eye. They can aggressively compete with the native hickatee for food and basking spaces, as well as potential hybrisidation with them.

Other Exotic Pets & Importation of Animals

There occasionally are instances of illegally imported animals. The illegal trade in wildlife globally is estimated to be worth up to US $23 billion, making it one of the most lucrative illegal trades (behind drugs trade, illegal logging, oil theft, human trafficking and arms dealing). The Cayman Islands is Party to the Convention on International Trade in Endangered Species (CITES) through the UK, and there are extra domestic regulations on importation and between-island transportation of species, in part to screen potential invasive species. These regulations protect endangered species locally and globally as well as legislate against importation of invasive species.

Any suspected illegal importation of an animal or plant, or new non-native species, should be reported to the DoE or DoA, preferably with a photo or video for identification.

The tall, dominating pine trees are expanding along the coastal habitats of Grand Cayman. The trees grow over and dominate native coastal vegetation such as seagrape and plopnut. The dropped needles create thick carpets, blocking any plants from growing in the understory. By blocking both native trees and understory, they create a monoculture along parts of the coastline, completely altering the coastal habitats. At the time of writing, the DoE does not have the capacity or resources to initiate island-wide control of casuarina and coastal habitat restoration in lieu of more destructive invasive species projects. 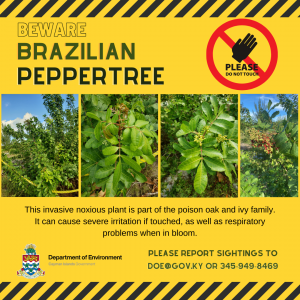 The Brazilian Peppertree (Schinus terebinthifolia), also known as Brazilian pepper, aroeira, rose pepper, Christmas berry or Florida Holly, is highly invasive, poisonous, South American plant that originally entered Cayman accidentally with a shipment of ornamental plants. It is a member of the poison oak and ivy family and was first detected in Cayman Brac in 2009, and later seen in Grand Cayman in 2020. This medium to large sized tree has alternate pinnate leaves, small, white flowers and clusters of dense, red berries. The sap can be a severe  irritant to the skin and when flowering, the pollen can irritate the lungs causing an allergic reaction. Brazilian pepper can grow in a wide variety of habitats and quickly outcompete other shrubs in the area. It thrives in disturbed areas where water collects, like canals, drainage ditches, ponds, walking paths and road sides, and is often confused with mangrove and buttonwood. It is common in the west of Cayman Brac and there are some specimens being controlled in West Bay, Grand Cayman to avoid an infestation.

This medium-sized tree has small leaflets on pinnately compound leaves and clusters of green seed pods that eventually turn brown. It can be differentiated from Poinciana/flame tree by the smaller size and much smaller, clustered seed pods. This tree quickly colonises areas, especially spaces which have been recently cleared.

The curly bean also has small leaflets on pinnately compound leaves. The seed pods give the tree its name-sake, twisting around when the red seeds are ripe and curling up tightly when dried out. This tall tree prefers damp environments, and quickly overtakes the vegetation when in the ideal habitat.

There are two species of scaevola in the Cayman Islands: Scaevola plumieri, sometimes known as beach elm, the native Caribbean species and Scaevola taccada, sometimes known as beach naupaka in its native range in the Pacific. Beach elm produces black fruit while beach naupaka can grow taller and produces white fruit. The non-native species spreads and dominates in coastal habitats very easily, pushing out the native species.

Other Exotic Plants & Importation of Plants

There are a number of plants imported for ornamental use prior to screening of importations becoming mandatory that have invasive tendencies. Christmas tree palm, asparagus fern, mother-in-law’s tongue and Indian almond are some of the ornamental flora which propagate easily in gardens and overflow into natural areas. Increasing abundance and diversity of native plants when landscaping is strongly encouraged by the DoE and has many benefits, including more wildlife visiting your garden. For more information on using native plants see here.