27 August – On Wednesday, 21 August, RCIPS officers, along with officers from the Cayman Islands Customs and Border Control Service, conducted a joint operation at an address on Up The Hill Road in West Bay. During the operation, officers had cause to search a vehicle at the location. Officers recovered a package containing suspected ganja and arrested a man, age 27 of Bodden Town, on suspicion of possession and consumption of ganja. 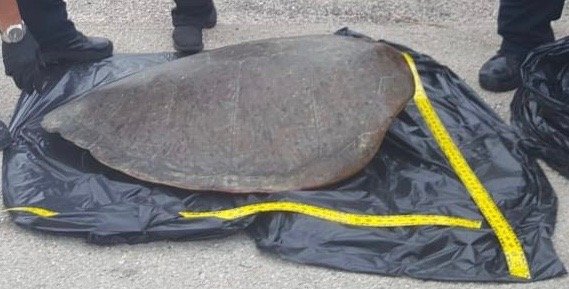 During a further search of the vehicle, officers discovered a turtle shell with what appeared to be blood. As a result, officers conducted a search of the residence, where they found a package of suspected turtle meat.

They have been granted bail as investigations continue.

“Although our initial search was conducted based on possible drug offenses, the marine offense that was detected is quite significant,” said Detective Superintendent Peter Lansdown. “As the police service, it is part of our remit to investigate and prosecute these offenses as well, in conjunction with our partner agencies, and it is a responsibility we take very seriously.”

“The shell was taken from an adult Green Sea Turtle that was one of less than 150 such animals left in the wild around the Cayman Islands. It is also the second turtle shell recovered in an apparent poaching incident within the past month on Grand Cayman,” said Dr. Janice Blumenthal of the Department of Environment.

“Although the Department of Environment has seen a steady increase in the number of turtle nests in recent years, poaching of even a few endangered adult sea turtles can lead to a reversal of that trend very quickly.”